The past month has been all about product development.

We’re also raising some funds, or in any event we’re going to try, and we’ve got meeting with a few bankers in the next couple weeks. I think we can get a loan no problem; the issue will be how big we can get it. We’ve got some flexibility but we may need to go to Angels if it doesn’t work out. Honestly I really just hope it works out because then I could just get on with it. We’ve got to raise a fair amount, somewhere north of 100K and south of 1M to be vague about it. I just finished a full blown business plan and forecast, and I’m particularly pleased with the forecast. I redid it from the ground up to be maximally simple but still cover all the categories we need.

Mark’s exclusively on software, as is Steve (our new Software contractor). Nate, who worked on the Logic16 HDL last time around, is on hardware, firmware and HDL full time, but we’ll be outsourcing a lot of the actual schematic capture and the entire PCB layout to help speed things along and reduce the risk. I’ll be directly responsible for enclosure and cables, as well as marketing. The most important thing is making sure we make a product that is awesome.

We’ve got a plan that stretches from now till the finish line in April of next year. Frankly, what we’re doing is extremely ambitious. It’s really going to test out if I learned anything from the last four years. Probably the biggest risk is software, followed by hardware, followed by a laundry list of other potential land mines. We do have an unprecedented amount of talent to bring to bear, but Logic16 was comparatively straightforward and still took just about forever to get released.

Right now we’re revamping our entire build environment, adding unit tests, and formalizing QA. Mark has been researching and proving out a bunch of the different software related technologies we’ll be using. We’ve documented our current software architecture, and right now are designing what the API-level functionality of the new architecture will need to look like. Then the idea is to build the new architecture up in a way that co-exists with existing functionality, such that the old functionality can be slowly switched over to the new system and the software is never unbuildable for more than a couple days. In principal, it should work well.

The downside of this of course is that it pushes out all the new features. The upside is that we should be able to push out new builds even while all this is going on, integrating, for example, the additional analyzers we’ve had built over the last few months. Have I mentioned we have JTAG now? Write Mark at @ support@saleae.com to get it before it’s released in a month or so. There’s a few other big ones in the works that should be out in a month too.

Our new methodology for this is that we will do (1) component selection and block diagraming for every non-discrete part. That’s what we’re doing right now. Then (2) we will hand this off to a contacted firm to turn this into comprehensive schematics. Then we’ll review that in detail, as well as have at least one other contractor look at it. Then it’ll go back to the same firm to be turned into a PCB layout. The only part I’m not sure about is how we’ll specify form factor requirements. I’m not worried however, I’m sure I can just specify this with SolidWorks drawings. Depending on the perceived risks at the time, we’ll either shoot for a form factor board right away, or, more likely create something half way in between, so that most of the routing doesn’t have to be thrown away. We’ll have to make sure that either way the board is easy to debug. As we get a little further down the road will do the exact same thing for a dedicated functional test board. The functional test will be extremely comprehensive.

I’m going to start on this this week. I’m much more worried about the cable design than I am the enclosure, since the most important thing will be to find an awesome manufacturer for this. This thing has to be Fluke quality if you know what I mean. I’ll probably fly around and visit some.

Last week I flew out to visit with our current metal finisher, to try and put to some bed some issues we’ve been having. That went extremely well I’m happy to say. No more messing around over email, going in person is the way to go. In addition it was awesome to see their facility; we actually ran a couple Logic parts through entire the process while I was there.

Some big events during the last month. I really enjoyed the latest Apple keynote, and am excited about some of the stuff coming up in iOS 6 and Lion. Of course, SpaceX told its critics to go screw themselves by successfully docking with the ISS in an awesome, flawless mission. And lastly, Tesla Motors started to ship the Model S, which has so far gotten rave reviews. I’m super excited about it.

Inventory has been going very smoothly lately. We’re ordering pretty much on time (thanks to a bunch of software work), consistently, and we have been able to do so because of pretty nice jump in our Wells Fargo line of credit. Could it be that our inventory woes are finally behind us? We sure have a lot of cash tied up in inventory. The problem is we still have a bunch of suppliers that have really long lead times and require most of their payment up front. That’s not really the only issue – but now that we can afford the working capital, it sure is worth it not to go out of stock. We don’t have the typically issues of inventory obsolescence or devaluation, at least not yet. Replacing a product with a newer version on a particular day is a very interesting challenge. Not one that we’ll be facing any time soon, but eventually…

Mark’s been learning to kite surf, which is apparently awesome. He’s got this trainer kite that a blast to fly, and pretty amazing really. I went camping recently, for the first time in years which was great. On the day of the Venus transit, Steve brought in his telescope and we grabbed some photos and hung out in the park. Allison got a brand new car, woo hoo! I’ve started working out again, finally, and I’m excited about that.

I keep thinking about how to swing some crazy thing where I somehow get a sweet garage and start a hobby where I slowly fix up and repaint my entire car, but then reality sinks back in. Same deal with living on a boat, getting a Tesla Roadster, or getting a pilot’s license. Keep telling myself it’ll make a lot more sense once Saleae is doing as well as we’re all shooting for. I don’t know about this continual living in the future thing, but at least I feel like I’m getting somewhere with Saleae.

It’s a super exciting time in the company’s history. We’ve got a pretty good plan and if we manage to execute against it I think we’ll really have something. There’s a very good chance we’re overreaching on this one but if it was too easy someone else would have already done it and in any event it wouldn’t be worth getting excited about. Next blog update (next month) we’ll be at the end of “phase I” so I’ll have more to report on how funding looks and how progress has been. 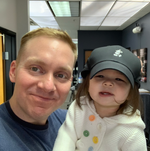